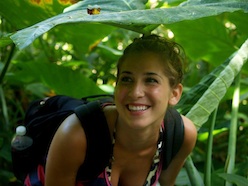 When most people think of endangered species, they probably do not think of bats – the animals are more often seen as a nuisance or as vectors of disease. But EENR undergraduate Jill Azzolini is expanding the bat appreciation audience with her short film highlighting the research of Department faculty member Dr. Brooke Maslo. Says Azzolini, “No one really talks about bats, except as pests. They have a bad rep, but they’re really in trouble.”

Azzolini met Maslo in Topics in Ecology and Evolution class, where Maslo presented her research on White-nose Syndrome in bats, a European fungal disease that is to blame for precipitous bat population declines. From the pathogen's first New Jersey discovery in 2009 to the following year, says Maslo, "the bat census of the mine that I study dropped from 27,000 to 1,750. And it's spreading ? we've confirmed [the presence of White-nose Syndrome] in seven bat species." 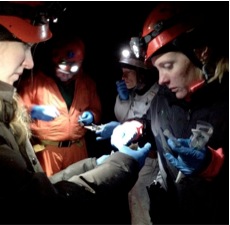 One of Maslo's current goals is to shed light on what she calls "a small sliver of good news" ? her preliminary data suggest that after an initial mass mortality from White-nose Syndrome, some populations of Little Brown Bats (Myotis lucifugus) appear to stabilize over time. Maslo and her collaborators hope to tease apart some of the potential causes of that stabilization. Says Maslo, "We can discount one of those potential causes already -- higher survival over time is not due to immigration of bats from other [caves], because we know now that many of the the same bats are returning year after year. If bats were immigrating in and dying at the same rate, then we wouldn't see an increase in annual survival." Another option, and the one she's working on now, is based on the "evolutionary rescue hypothesis": the possibility that the "selective pressure of White-nose Syndrome is causing mortality of bats that do not have genetic resistance. But that in some populations, there are genotypes with some resistance that survive and reproduce and will hopefully "rescue" the population."

Azzolini got her chance to tell that story when Nate Dappen, co-founder of Day's Edge Productions, offered her an internship that involved video editing, transcription, and an independent film project. Azzolini zeroed in on the opportunity to combine her passion for ecology with her emergent interest in filmmaking.

With the story of Dr. Maslo's research in mind, Azzolini took the initiative to craft her interview, contact and interview her, and produce and edit the film, called Fight for Flight: The Battle Against Whitenose Syndrome, which can be seen on the Day's Edge Facebook and Vimeo pages. Azzolini, who had no prior film experience, was "hardworking, dedicated, and positive from the very beginning," says Dappen. "I'm super impressed by how much she learned in such a short time."

So will there be more? "I would love to do [the internship] again next summer," says Azzolini, who wants to maintain the ecology and conservation focus of her film projects. Says Dappen, "We'll be keeping an eye on her as she goes through school and develops her skills in science and film. She's got a future in either if she wants it."