Dr. Joan Ehrenfeld is honored with the 2011 Research Excellence Award from the School of Environmental and Biological Sciences at Rutgers, awarded on April 27, 2011. Joan initiated her exemplary research career at Rutgers in 1976, when she began in the position of Assistant Research Professor in the Center for Coastal and Environmental Studies. From 1990 through 1996, Joan directed the Division of Water Resources in the Institute for Marine and Coastal Sciences, followed by directing the New Jersey Water Resources Research Institute from 1996 to 2009. In 1997 she joined the faculty of the new Department of Ecology, Evolution, and Natural Resources. 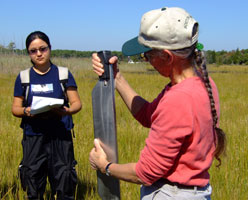 Joan's research centers on wetlands ecology and invasive plant species, which are areas not only of obvious ecological concern but also of considerable socio-economic importance. One of her current and ongoing projects links forest restoration with carbon sequestration, an issue with clear implications regarding the global climate. Another investigates associations between biodiversity and the risk and incidence of West Nile virus. Still others focus on responses of native vegetation to invasive species, incorporating a citizen-science approach as part of the investigation. Yet another prominent theme in her research - and one that is especially well suited given Rutgers' location -- is urbanization, particularly with regard to the retention of soil nutrients in wetlands.

As evidence of the collaborative nature of her research, Joan lists 11 co-PIs on projects funded since 2005, not counting post-docs and students in her own research group. On a national level, Joan is currently a member of the Science Advisory Board of the United States Environmental Protection Agency, sitting on the Ecological Processes and Effects Committee., and a member of the National Research Council Committee on Independent Scientific Review of Everglades Restoration Progress. Joan's international stature is evident in her being one of only two speakers from outside The Netherlands to be invited to give a plenary address at the First Annual Meeting of the Netherlands Ecological Research Network. In the past several years, she has also given invited talks at the international wetland meeting in Cuiaba, Brazil and in Xiamen, China. 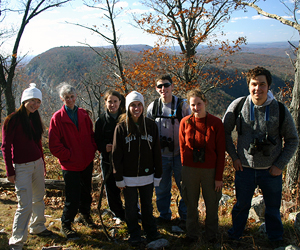 Throughout her years at Rutgers, Joan has maintained an active, internationally- significant research program, as evidenced by the numbers of students and post-docs she has trained, her publications and presentations, and her success in competing for grants funded by NSF, EPA, USDA, and others. Just since 2005, Joan has been the recipient of more than $2.1 million in grant funding as PI or co-PI from EPA, NSF, USDA, NJDEP, and other public and private sources. In that time period, she has authored or co-authored 28 refereed publications, 9 non-refereed publications, and 2 book chapters. As an indication of her role as the mentor of an active and productive research group, almost all her publications include her students and post- docs as co-authors. Joan and her research group have produced 38 presentations and abstracts since 2005. She has been the primary advisor for 7 Ph.D. dissertations and 1 M.S. thesis since 2005.